Crime of the Week

If you have any information about these crimes or any person(s) involved, you are urged to call Crime Stoppers at 308-284-4600 or submit a Web Tip .  You do not have to give your name.  CRIME STOPPERS will pay a cash reward of up to $1000 and you can remain anonymous.

On Monday July 6th between the hours of 5:00 AM and 7:30 AM unknown persons stole a blue, 2000 Dodge Ram, Quad Cab pickup from the Green Acres trailer court on road East 85.  The pickup had Nebraska license plates 68-2161 and has been entered into the national data base.  The pickup was valued at approximately $9,000 making this crime a felony.

On Sunday June 28th at about 2:15 AM.  An unknown person cut the back fence to the lot of Poppe’s truck and diesel at 902 West 1 street and stole 2 dirt bikes.  The suspect was a tall, stocky, white, male wearing a white cloth on his face, long shorts with a stripe, and dark colored tennis shoes. The vehicle used in the theft was an unknown make of pickup pulling a small 2 wheeled trailer. The pickup has a taillight in the upper middle part of the tailgate.  The dirt bikes are a red 2001 Honda XR 100 and a green 03 or 04 Kawasaki KX65.  The dirt bikes had stickers on them that said “stolley” and “tank”, and together were valued at over $4000.

The Perkins County Sheriff’s Office needs your help in solving a recent theft.

Sometime between Thursday night, April 28th and early Saturday morning, April 30th unknown persons stole a yellow 1999 diesel powered telescopic forklift from the east lot of Wally`s Sales & Service, Inc. located on Highway 61 on the north edge of Grant.  The vehicle, also known as a telehandler, was a Caterpillar model TH83.  At the time of the theft the telehandler had red and yellow graphics on the sides that read "Woody`s Pivot Service."  The vehicle weighs approximately 23,000 pounds and the suspects would have used a large trailer to tow vehicle away.  The vehicle’s serial number has been entered into the national database.  The estimated value of the telehandler is $20,000.00.

The vehicle pictured is a photo of a similar vehicle not that of the actual vehicle. 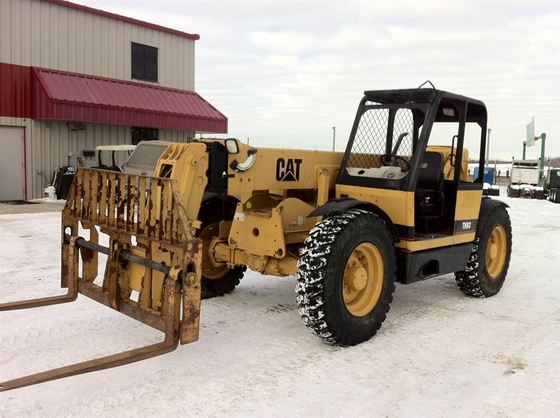 The Ogallala Police Department needs your help in solving a recent theft.

In the overnight hours of Monday April 27th.  Unknown persons removed the tires and wheels off of a Red 2005 Dodge Ram pickup parked in the 10 block of West E Street, South of the Schmidt Motors Detail Shop.  The Tires are NEXEN brand 305/40R22.  The wheels, are Mopar SRT 22” aluminum rims with a 10 spoke, starfish pattern.  The total loss of the tires and wheels is estimated at over $3800.

The attached pictures are of the actual wheels and tires. 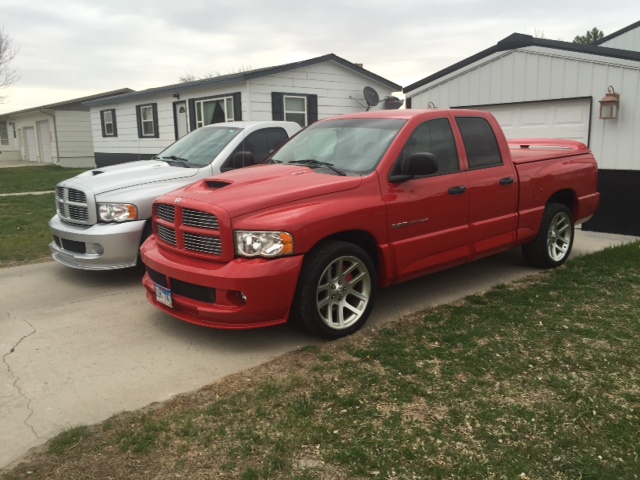 The Ogallala Police Department and Keith County Sheriffs Office needs your help in solving a rash of recent burglaries.

In the past several months Police and Deputies had taken multiple reports of burglaries in and around Ogallala, and on the North Side of Lake McConaughy.  Most of the reports came unoccupied residences and out-buildings.  Items stolen included power tools and electronics.  If you have any information that could be helpful you are urged to contact law enforcement, and to report any suspicious behavior.

In the overnight hours on Tuesday January 6th or Wednesday January 7th, unknown persons entered a garage in the 800 block of East B Street and stole multiple power tools of various brands including drills, nail guns, staple guns, a sander, a Dremmell tool, and a multi too. Total losses are estimated at over $800.

This month’s crime of the month involves a burglary that occurred in Ogallala.  Sometime between November 19th and November 22nd, an unknown person or persons entered a residence in the 900 Block of East C and stole numerous valuable items.  Items taken include, 3 flat screen TVs, a WIFI modem, a dyson vacuum cleaner, a shark vacuum cleaner and numerous other items.  The total value of all items taken is well over $3,000.

The Keith County Sheriff’s Office needs your help in solving a local Burglary.

On October 19th Deputies were called to Happy Jacks in Brule for a burglary.  Deputies learned that an unknown subject forcibly gained entry to the business.  Once inside the business the suspects caused over $1,500 in damages and stole over $500 in cash.

On August 28th Officers were called to the Petrified wood gallery located at 418 East 1st.  Officer learned that an unknown subject stole 2 large metal yard ornaments from the front of the business.  These items were described as 2 foot tall metal mushrooms with a value of over $100.

On August 4th Officers took a report of a prior burglary.  The reporting party advised that some sometime in the last 2 months unknown persons entered his residence at 422 East 5th Street and stole a .243 caliber Parker Hale bolt action rifle.  The value of the firearm was estimated at about $500.

The Ogallala Police Department would like to remind citizens of our May update where 2 firearms, a 30-06 rifle, and a .357 Ruger Blackhawk Revolver were stolen from 616 East 6th street, about 2 blocks away from the other theft.  It is unknown if these 2 burglaries are related but due to the time frame and proximity to each other, it is possible.  Please be aware and responsible if buying or trading guns from private sellers.

The Ogallala Police Department needs your help in solving a recent burglary.   Sometime in the overnight hours of June 21, unknown individuals damaged the door and entered Farmer’s COOP located in the 300 block of West Railroad St.  Once inside, the unknown persons took computers, several sets of keys to vehicles and buildings, as well as cash and checks.  The total amount of items stolen and damaged is over $3,000.

On the night of Thursday May 15th unknown persons caused extensive damage to the Ogallala Nature Park. The vandals damaged trees, signs, bird houses, and completely destroyed a group of benches in the park. Damage is estimated at over $1200 not including labor.  Police are seeking information about the individuals who are responsible for this senseless act. 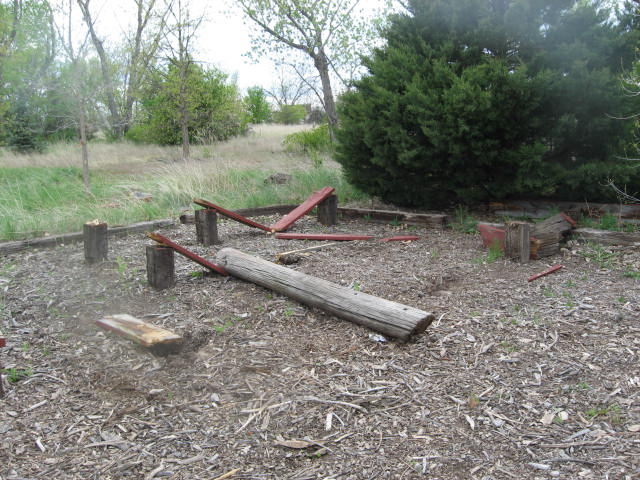 On April 18th sometime around 2PM, unknown persons broke into the back door of 616 East 6th Street, across from the high school track. Suspects then stole 2 firearms, a 30-06 rifle, and a .357 Ruger Blackhawk Revolver were stolen. The total value of the guns were estimated at $1,100.

The second theft occurred on or around the date of April 6th in the 900 block of West 6th Street.  Unknown persons stole a homemade hydraulic log splitter, mounted on a trailer from an empty lot.   The value of the equipment was $1500, making both of these crimes felonies.

The Ogallala Police Department needs your help in solving a recent Residential Burglary.

On January 14th Officers responded to a residence in the 400 block of West 4th St.  Unknown persons entered a residence and stole a 32 inch flat screen, home theater system, computer, digital camera and cash.  Value of the items stole was over $500 making this a Felony.

The Keith County Sheriff’s Office needs your help in solving two recent thefts involving tools.  On November 18, Deputies were called to the 1500 Mile of Keystone-Sarben Road for a theft.  Deputies learned that unknown persons stole several tools from a construction site.  Most of the tools stolen were used commonly for concrete work.  The value of the tools stolen is over $1300.  Then on November 25, Deputies were called to the 100 Block of West 1st Street in Paxton for another theft of tools.  Deputies learned that unknown persons entered a locked vehicle and stole several power tools.  The brands of the stolen power tools were Makita, Craftsman and Dewalt.  The value of the stolen tools in this case was estimated around $3000.  Both of these thefts are felonies.

STATUS: SOLVED
The Ogallala Police Department needs your help in solving a recent burglary.  On September 21, 2013, Officers were called to L&L Trailer Court for a prior burglary.  It was discovered that unknown person or persons forced entry into the trailer after the homeowner had left.  The unknown person or persons then took several items from the residence.  Stolen items include jewelry, knives, harmonicas, purses, and two badges belonging to former Keith County Sheriff’s deputies.  The estimated loss of all the items was estimated at around $12,000 making this crime a felony.

On September 2, Deputies were called to Kingsley Lodge at Lake McConaughy. Deputies learned that sometime overnight on September 1, unknown subjects broke a window and entered the business and stole several items. The items taken were a safe containing cash, a vehicle title and several books of park entry stickers belonging to the Nebraska Game and Parks. Other items were also damaged inside the store. The total of the damaged and stolen items taken were valued at over $20,000.

Sometime between July 11th and July 14th a well engine was stolen from the property at 210 Road East 120.  The Engine was a 408 CAT engine, and was painted CAT yellow. The estimated value of the engine was $3,500, making this crime a Felony.

The Keith County Sheriff’s Office needs your help in solving a recent Theft.

On June 1st the Keith County Sheriff’s Office took a report of a burglary to a barn at 151 West Hwy 26, North of Ogallala.  Sometime on or around the date of May 30th or  31st , unknown suspects gained entry to a barn on the property and stole several electric saws, sanders and drills along with horse tack, dog training gear, and a weed eater. The total value of all the items stolen is over $500 making this crime a Felony.

The Keith County Sheriff’s Office needs your help in solving a burglary.

On April 8 and April 24 2013, Deputies were called to J and K Irrigation in Ogallala.  Deputies learned that on two separate occasions; unknown subjects had entered the property overnight and stolen several spools of copper span wire as well as fishing tackle and equipment.   A smaller red single cab pickup with a black tool box was seen on video leaving the area around the time of the second theft.  The value of the wire and fishing gear were estimated at over $ 3800. 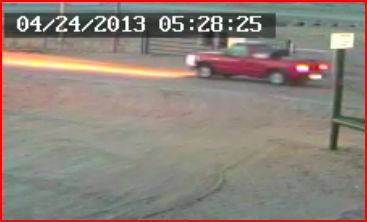